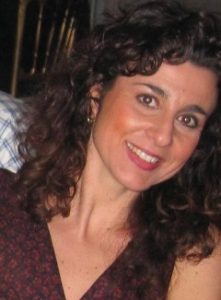 Antonella Tajani is a physicist, graduated at Sapienza University in Rome in 1992 with a PhD in Materials Science, obtained at the Université Joseph Fourier in Grenoble. Her professional career as scientist, started in 1993 at Sapienza University and continued abroad, firstly at the Seibersdorf Laboratories of the International Atomic Energy Agency (UN) as leader of the physics group and technical officer of several scientific projects for technology transfer in developing countries, promoted by the United Nations.

Antonella then moved to Grenoble where she worked as researcher at the CNRS on the growth and characterization of phosphorus-doped diamond homoepitaxial thin films by different analytical techniques.

In 2004 she was offered a position at Element Six Ltd, De Beers Industrial Diamond in United Kingdom, where she was project manager and carried out research activities on the growth, fabrication and characterization of synthetic diamond, focused on enabling advanced technical applications of the material.

In 2006 Antonella returned to Italy where she was hired as senior technologist at the National Research Council of Italy (CNR) and spent a year at the Ministry of University and Research where she was in charge of the international relations with the Member States during the Italian chair of the European Eureka Initiative. Then, she joined the Department of Physics and Technologies of Matter, current position hold at CNR where she is in charge of the scientific secretariat of the Department.

Between June 2015 and June 2016 she spent a year at the Frascati Laboratories of the National Institute of Nuclear Physics (INFN) as Director of the Research Support Office.

Antonella has a broad and up-to date experience either in research and development, in materials science and, in particular, in the field of diamond-based devices and characterization of synthetic diamond for high power and high voltage applications. She also has a broad experience in research management at international level. She is supporting the Department in the CNR policy of large scale infrastructures, in particular synchrotron radiation and neutron sources facilities and since 2014 she is member of the Italian delegation to the ESRF Council. She is co–author of more than 60 papers including scientific publications on peer-reviewed ISI-indexed international journals, technical reports, proceedings and of a patent on a high voltage diamond based switching device.